The most awaited movie Chandigarh Kare Aashiqui has been released in theatres. Vaani Kapoor is in the lead role along with Ayushmann in the film. After watching the trailer, it was clear that the film's story would be unique. Every time Ayushmann Khurrana brings a message with his film, the same thing happens.

In Bollywood love stories, we often see boy-girl romance, little struggle, breakup, and then a happy ending. But this film is a bit different. Boy and girl meet in this story... love also happens & it is too difficult for Ayushmann Khurana (manu)to accept Vaani Kapoor (Manvi)'s reality. Maanvi is a hot and bold girl who has accepted herself. 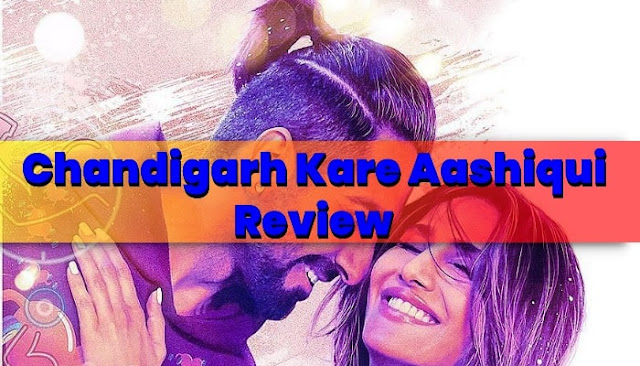 The director tries to raise the issue directly without doing extravagant drama in the film. As we learn about Manvi's reality, Manu's thinking, her shock, disbelief and her fear are also shown in this film. Without much drama, the boy gets to know the truth and handles it well. There is also a light-hearted comedy in the film with a serious issue that will not get you bored. I will promise you.

Manu's twin brothers have won hearts. The screenplay of the story is superb. The cinematography of the film is also very good. Taking such a risk with a love story is important in Indian cinema. Whether the film excites the audience or the disappointment, only time will tell. So if you want to see something new this weekend, you must watch this film. This film is only for you. The acting of all the actors in the film is very amazing.

Abhishek Kapoor is one film director who tries to do something different even after being in the commercial format. The director Abhishek has introduced many unique films, for example, Rock On and Kai Po Che. Now he is back with a new twist in his latest film, 'Chandigarh Kare Aashiqui'. It is an awesome film based on the love story of Manvinder Munjal, aka Manu and Maanvi Brar, but the turning point of this film is that Maanvi is a trans girl. When Manu knows the reality of manvi, he feels cheated. In a conservative country like India, many jokes are made about this topic, but even if the pace is slow, these things are always being accepted.

Review regarding story line up of this film

The film's story is not so lengthy; it is a simple story Boy and girl meet. Love happened. The secret regarding this film has been revealed, and the matter is now to be accepted openly. It could have been written better, but the author could not think of a new one. The issue of accepting a trans girl is shown very simply when it has full scope to dramatise it. But it is also so good.

However, the film director was focused on making the film first entertaining, and he has found success in it. Chandigarh is in the name of the film because Chandigarh culture is covered throughout the film & The whole culture and attitude are tried as shown in every frame of the film. The lassi, Masti, open jeep, and the colours of loudness seen in the film make it worth watching.

Important attention has been given to all the characters to capture the audience's attention and not let the audience get bored anywhere throughout the picture.

Manu and Maanvi are fitness freaks. Manu keeps working out in the gym throughout the day, and his quirks make him a young man. Has turned 30 years old and is not married, and Manu's father wants Manu to get married early so that he can remarry as Manu's mother has passed years.

Here Maanvi Zumba flaunts her zero figure by doing. Decorating is his hobby. One keeps on a protein diet, and the other's food is tablets. Manu has a rude nature, easily gets furious like a bull, and if English doesn't enter, Maanvi chatters in English, and manners are in his blood.

The differentiation between these two characters has made awesome clear lines of sight that engage. Many characters are also found as Manu's dad, granddad, two sisters, two friends, and Maanvi's friend, who are continually tickling. The sequence also figures out how to make Manu laugh when he becomes aware of Maanvi's past. The track 'Gabru Of All Time' does not fit the story completely.

Abhishek Kapoor's film may not have many ups and downs in the story, but he has maintained the flow of humour. He has made the Punjabi climate generally excellent; even though it is clear, it doesn't shake. Also, the best work has been taken from the specialists. If the succession of Manu's shift towards heart had been composed well, the film would have been something more. The music of this film is fine. The dialogue is awesome, and the editing of this film is good.

Ayushmann is one of the most versatile actors, and he proves it again in Chandigarh Kare Aashiqui. How he has made his body for this job is unbelievable. Looks pretty cool. Additionally, the mentality he has gotten is awesome. Immersed in his character. Vaani Kapoor is the most interesting character in this film. He has numerous emotional scenes where she has shown his ability. The work of other star Cast entertainers is also great.

Star Cast of this film

Does Chandigarh Kare Aashiqui break the shackles of stereotypes along with entertaining?

How to watch this film online

If you reach this section, then I think you read the whole article, and now you are ready to watch Chandigarh Kare Aashiqui, if you follow the above instructions, you can watch this film for free and pay both ways. Now, if you love all the reviews of critics, do not forget to share this article and, if possible, leave your valuable comment below.